February 24th, 2021 / No Comments
FGL To Pen New Songs For ‘May We All’ Musical
Articles

“@FLAGAline was first with one diamond single, and now they are the first with two!” the tweet says. “Congrats Fellas.”

The group’s 2012 breakout hit “cruise” and 2017’s “Meant To Be” are the two songs earning the honor for Florida Georgia Line. According to the RIAA website, only 43 songs have obtained diamond status making the honor of having two highly unique.

Tyler and Hayley Hubbard are getting candid about the adjustments they’ve made since bringing home baby No. 3.

Already parents to son Luca Reed, 13 months, and daughter Olivia Rose, 2½, the Florida Georgia Line singer and his wife, both 33, welcomed their son Atlas Roy on Sept. 24 in. Nashville.

In this week’s issue of PEOPLE, Hayley reveals why she has decided to feed their baby boy, Atlas, formula.

“I’m not breastfeeding this time around because, now looking back, breastfeeding really amplified symptoms of postpartum depression for me,” says Hayley, who works with the Every Mother Counts charity, which aims to improve maternal health.

She adds, “It was never something that came easy to me or something that I honestly enjoyed, no matter how many specialists we talked to or how well I was producing milk.” Baby Hubbard No. 3 has made his debut!

“Atlas stands for strength. For us, this name also represents our family’s passion for travel and experiencing different cultures,” the Hubbards explain.

Adds Tyler, “Roy was the name of my dad, who passed away when I was 20. Getting to name our son after him is so special to us. Atlas will carry on my dad’s legacy and will always be a reminder of how well he loved everyone.” 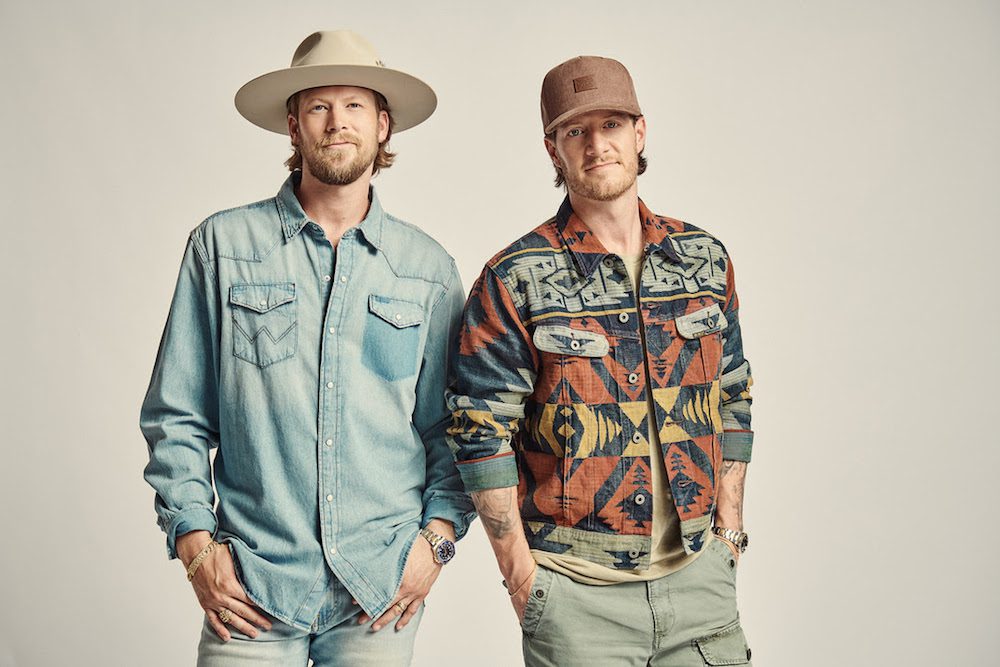 Florida Georgia Line have accomplished more in the past few years than most artists do in a lifetime. Five years since being named Forbes’ 30 Under 30, Tyler Hubbard and Brian Kelley continue to push genre lines and industry standards as artists, label executives, publishers and producers.

On the heels of celebrating the one-year anniversary of their label Round Here Records, Florida Georgia Line exclusively reveal to Forbes that they are the newest writers signed to their own Tree Vibez Music roster. “It’s a dream come true to call Tree Vibez Music our publishing home,” Kelley and Hubbard tell me. “We’ve been extremely blessed to be able to build a company and a staff, alongside [general manager] Leslie DiPiero, that we feel confident will continue to help us grow as writers. We look forward to the next chapter of our songwriting journey with our TVM family.”

The pair met at Nashville’s Belmont University where they pursued their joint passion of songwriting. Hubbard, 33, has 13 No. 1 songs to his name including the country genre’s first diamond certification and 11-times platinum 2012 debut single “Cruise” and 9-times platinum crossover hit “Meant to Be” with Bebe Rexha, while Kelley, 34, has amassed 11 chart toppers with “Cruise” and cuts by Jason Aldean (“Lights Come On”) and Cole Swindell (“Hope You Get Lonely Tonight”). After creating their publishing company Tree Vibez Music in 2015, Hubbard says signing there is a “full circle” moment.

May 27th, 2020 / No Comments
TYLER ‘READY TO BE FINISHED’ HAVING KIDS
Articles


For Florida Georgia Line’s Tyler Hubbard and his wife Hayley, five is the magic number when it comes to family.

In this week’s issue of PEOPLE, on newsstands Friday, the country star says that he and Hayley — who is currently pregnant with their third child — will be “ready to be finished” having kids after the arrival of their baby boy.

“In a weird way, I think we’re looking forward to the challenge,” says Hubbard, 33. “The whole experience of having a child is like none other. It’s a rush of emotion and love that can hardly be explained. We’re looking forward to experiencing that again and then just knowing we’re going to be finished. This is our family, and let’s grow together.”

Hubbard and Hayley, 31, are already parents to son Luca, 9 months, and daughter Olivia, 2, whom they’ve been social distancing with at home in Nashville amid the novel coronavirus (COVID-19) outbreak. As to how he and Hayley have been handling isolation with an infant and a toddler, Hubbard says it’s been “more entertaining than challenging.”


Florida Georgia Line satisfied fans’ craving for new music with the release of a six-song EP on Friday (May 22).

“We’ve been workin’ on our fifth record for this past year, and we’re getting pretty close to being done, and we were talking a month or two ago and kinda schemin’ up, and we said, ‘Hey, let’s put a 6-pack out,’ Kelley recalled during a recent interview with the duo’s record label. “And we all took it literal, and hey, ‘let’s kind of brand it that way, even though thematically they’re not all party songs.’ And so this collection has a serious vibe, a party vibe, a love vibe. We feel like it’s pretty well rounded.”

The release of FGL’s 6-Pack comes as people around the world continue to grapple with the COVID-19 pandemic. Kelley hopes their new music brings some relief to fans during these uncharted times.

“You know, we’ve all been living in these uncertain times and music is healing and music touches people a lot of different ways, and so, we wanted to make sure we were balanced on this EP,” he explained. “So, [we’re] super excited to finally get this out and give our fans what they’ve been asking for, and hopefully put a smile on the world’s face.”


Interview: Florida Georgia Line’s Tyler Hubbard on I Love My Country, album number 5 and returning to the UK

The record-breaking duo are at the top of their game with four huge albums, the latest being 2019’s Can’t Say I Ain’t Country, and an embarrassment of certifications under their belts. They also launched their own record label Round Here Records in 2019, which sits alongside their publishing company Tree Vibez and their Nashville venue FGL House.

To mark the release of the new single, I spoke to Tyler Hubbard – one half of FGL – to discuss the feel-good track, find out more about the duo’s upcoming album and to talk about their overdue return to the UK…

How are you doing?

Are you surviving the corona virus lockdown that we all seem to be under?

We are yeah. We’re surviving and excited for it to pass and in the meantime we’re just staying home and enjoying some good quality time with the kids and the wives. We’re just here at the house so we’re trying to soak it up as much as we can and stay positive.

Your new single I Love My Country came out today and it’s such a feel good track. It feels like you guys had fun with this one. How did the song come about?

Yeah, we did. We had a lot of fun making this one and this song’s been in our world for maybe almost two years. It’s been around and some good buddies of ours wrote it. We just decided, ‘man, this song keeps coming back to us and we keep singing it so maybe we should record it with some of the FGL flavour on it and get it out to the world’. That’s what we decided decided to do and we had so much fun in the studio with our co-producer, Corey Crowder, bringing this song to life.

We’re excited that it’s out for the world and we really do hope it brings some encouragement, some joy and some fun to people’s houses the way that done to ours. We had a whole lot of fun making it so we hope that translates


It’s Time to Rethink Florida Georgia Line, One of Country’s Biggest Shapeshifters
The duo of Tyler Hubbard and Brian Kelley return with a brand new single—and a whole new outlook.

Here’s an (incomplete) list of what, in the eight years since their ridiculously successful debut, the men of Florida Georgia Line have become: headliners, husbands, restauranteurs, record label owners, whiskey makers, music producers and publishers. Tyler Hubbard, the Georgia half of the act, just announced that he and his wife Hayley will welcome a third child later this year. Brian Kelley, along with his wife Brittney, run the popular clothing brand Tribe Kelley. But what occasionally gets lost in the shuffle is that the duo has also emerged as one of the format’s premier musical shapeshifters, the latest evidence of which arrives today with their raucous new single “I Love My Country.”

“We haven’t had anything that hits this hard since ‘Round Here,’” says Kelley, the Sunshine State’s representative for the group, referring to their stadium-sized 2012 No.1. (It was their third to scale the Airplay Charts off their debut LP, Here’s to the Good Times.) “This one’s loud—it punches through the speaker,” he says of the song, a thunderous ode to down-home living. He’s right, though the last handful of years have hardly been quiet. Across their three ensuing albums, they’ve flirted with ethereal pop, reggae, folk, hip-hop, and R&B, and collaborated with the likes of Backstreet Boys, Ziggy Marley, Jason Aldean, Bebe Rexha, Tim McGraw, and Jason DeRulo. Most recently, they threw a pedal steel and a hick-hop flow on the country remix of Justin Bieber’s “Yummy.”